Riders to the Sea 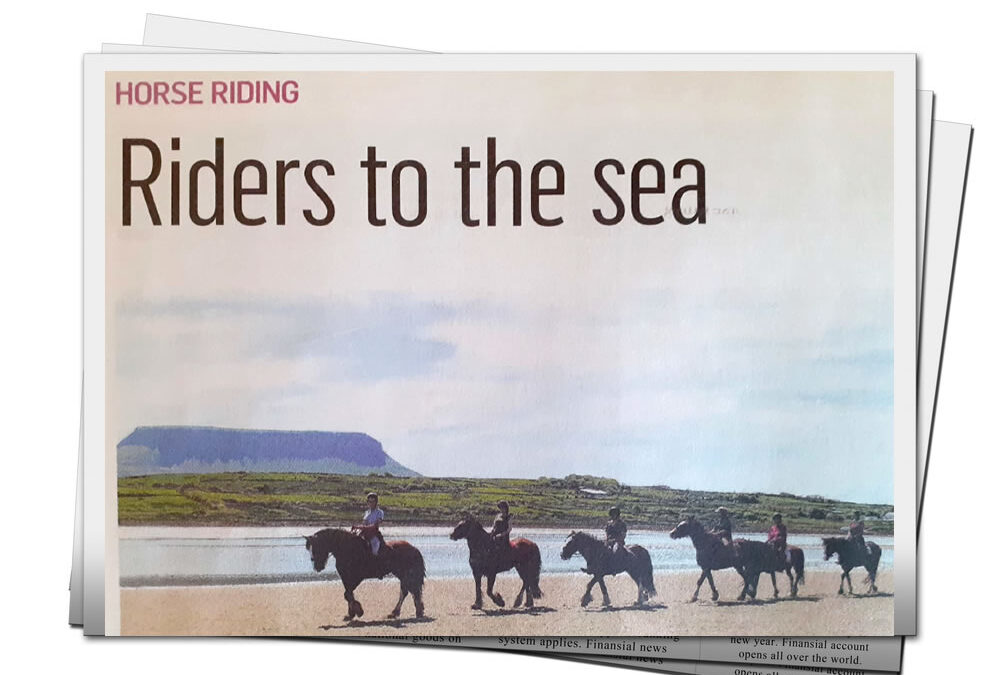 Well-known and respected Irish Journalist, Conor Pope, writes in special report on Sligo in The Irish Times, published on July 5th, 2013 about his ‘Heritage on Horseback’ Experience with Auriel on his fam trip to Sligo not long after she established Seatrails.

‘This patch of gorgeously rugged coastline just outside Sligo Town is one place where you will find an absence of civilisation, as a result, the most perfect riding conditions imaginable. And with the weather gods smiling on us from the cloudless sky, it quickly develops into a scene which could have been pulled directly from a Tourism Ireland brochure. Throw in a bit of archaeology and a touch of history and you have a wonderful way to pass half a day.

The archaeology and heritage bits are where Seatrails, www.seatrails.ie comes in. Auriel Robinson (owner) is an archaeologist with an interest in both horse riding and the sea and has managed to combine her three interests in a new venture which is quite the adventure. The Seatrails trek lasts for between four and five hours after which you feel informed and invigorated. ‘We leave the stables in a posse of eight and make our way down a country lane which has been dressed to the nines by nature in wildflowers.

We reach the sea about a kilometre away and trek along a rocky shore to Milk haven, a small but perfectly formed harbour where local fishermen have landed their catches for hundreds of years. It was also one of the few resources the indigenous population had during the famine. The seaweed which covers the rocks here was harvested relentlessly by people who would eat what they could have of it and use the rest to try and enrich the impoverished soil nearby, Robinson tells us.

We then cross a magnificent tidal lagoon at low tide which takes us to the back of the Streedagh dunes. All along the way our heritage guide points out things of archaeological interest although she doesn’t turn it into a full-blown lecture and keeps it mostly light and breezy- well as light and breezy as any talk about the Famine or Spanish Armada ships that were wrecked here after a horrendous gale in 1588 can be.

Once we make it through the Streedagh dunes, we make it to O ’Conors Island where Auriel rustles up a picnic from her saddle bag’. The owner of the island, Raymond O ‘Conor appears and tells Conor Pope and the group of his family homestead lying in ruins but with echoes from the past. His father was sent to the mainland from here in the 1950s and no one lived here since. He pointed out the old buildings, the garden, a cart shed, a piggery, a creamery and the old well. Pope continues ‘It’s not hard to imagine a family eking out an existence on this outcrop for hundreds of years and while the weather is calm and glorious, the trees bent double by gales suggest that it is not always so serenely pretty.

We got lucky with the weather on this trip, but this kind of adventure would be amazing in any weather’.