Try our adventurous Devil’s Chimney Trail overlooking stunning Glencar Valley which was formed during the last Great Ice Age in Ireland over 14,000 years ago. As you drive to the start point of the trail, your jaw will drop when you see the steep valley sides and a gorgeous deep blue lake called Glencar Lake. You are entering an ancient landscape that is steeped in tradition and natural Irish history. Your guide, Auriel, will be waiting for you at the main carpark of Glencar Lake, beside a bustling Café called ‘The Glencar Tea shed’ where you can refresh yourselves afterwards and admire the lake views. 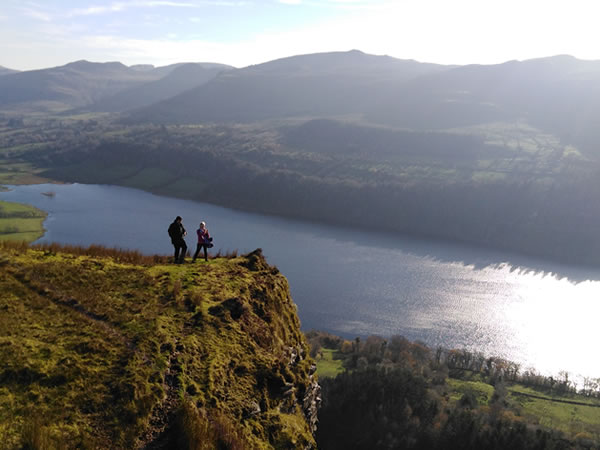 You will really enjoy this wonderful hike with your guide as she explains the formation of the valley, the geology of the mountains including Benbulben Mountain and the biodiversity of the wild and natural habitat that exists across the mountain range. All along the trail, you will look down on Glencar Lake which is a deep blue colour. You can see as far as Knocknarea Mountain in the distance to the west and you can see the Atlantic Ocean form here. Knocknarea Mountain is where Queen Maeve of Connaught is buried. 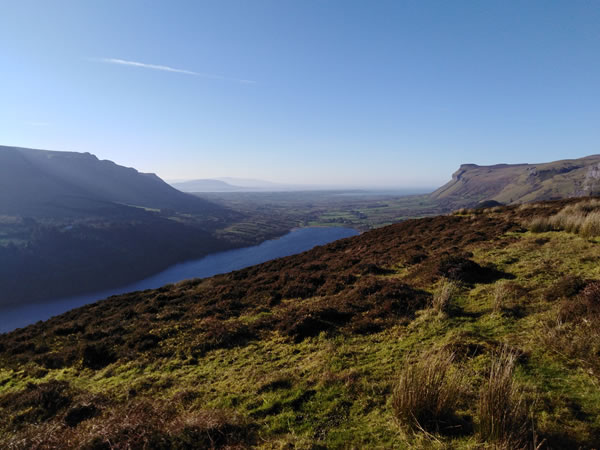 The trail includes woodland and mountainous terrain that is part of a Special Area of Conservation. Starting in evergreen woodland, we arrive onto open scrub and peat bog and traverse along a ridge which gives you incredible views of the huge U-shaped Valley below. We’ll see age-old yew trees growing on the cliff face too.  Peregrine falcons can be seen from time to time up here. Sheep graze happily around you and the peace is something else as you stare at the wonderful view from the cliff side. 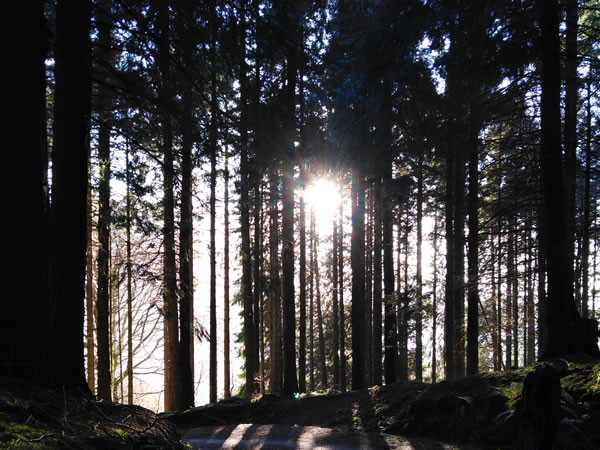 We stop for a tea and sandwich break at a ruined cottage by a little stream and take it all in before continuing onto a famous spot on the Sligo/Leitrim border called the ‘Devils Chimney’. This is a crack or vault in the limestone cliff which bears a stream known as ‘Sruth in Aghaidh an Aird’ in Irish, which means ‘stream against the height’. A pretty waterfall spills off the steep cliff face and when the wind is blowing from the south, the spray forms a rainbow over the cliff which is truly magical. It is no wonder why this landscape was an inspiration for our famous Irish poet, William Butler Yeats.

Top Tip! After the hike, you can have a look at Glencar Waterfall where Yeats wrote his famous poem, ‘The Stolen Child’ and soak up your view of the navy-blue water of Glencar Lake. 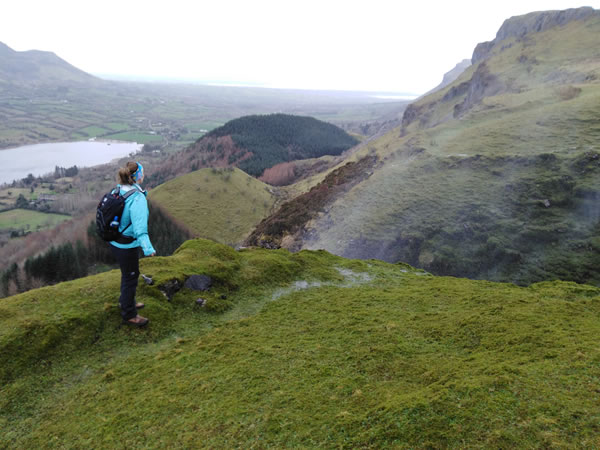 The last Great Ice Age occurred here roughly around 30,000 years ago and lasted up to about 14,000 years ago. During that time, it was possible for animals to cross into Ireland from mainland Europe. These animals included the Eurasian Lynx, the Artic fox, Arctic lemming, wolves, wild horses and brown bear related to the polar bear.  Today, if you look at the surrounding landscape, it is hard to believe that they were living here during the Ice Age. Over 100 years ago, archaeologists discovered bones of these animals inside the Keash Caves of south County Sligo. Since the melt down of the huge Ice sheet, glacial features formed called moraines and till and boulders were dumped across the lower lands of Sligo and out toward the coast. The rolling fields, ridges and drumlins you see today across the Sligo lowlands are the result of glacial deposition from that time. This till provides for good fertile land and hence, agricutural practices and settlement in Sligo dates as far back as the 5th millennia BCE. The builders of the Carrowmore Megalithic Tombs most likely used the boulders that were strewn across the landscape thousands of years after the ice melted. The U- Shaped Valley of Glencar is where a glacier would have sat and then pushed out the valley sides as it grew and then moved with gravity. Once the ice melted, these Valley sides would have crumbled, and the scree and debris filled the Valley floor. The water of the lake itself is the result of the meltdown of this massive glacier. There are other amazing U-Shaped Valleys in Sligo called Gleniff Horseshoe Valley and neighbouring Glenade Lough in Co. Leitrim. Glenade Lough is said to be one of the best examples of a classic U-Shaped Valley in Europe. Such landscapes inspire writers, artists and poets to this day. William Butler Yeats laments this wild Irish landscape in his poem, ‘Stolen Child’, written at Glencar.

‘Where the wandering water gushes, from the hills above Glen-Car, in pools among the rushes, that scarce could bathe a star,
We seek for slumbering trout, and whispering in their ears, give them unquiet dreams; leaning softly out from ferns that drop their tears over the young streams. Come away, O human child! To the waters and the wild with a faery, hand in hand, for the world’s more full of weeping than you can understand’.

4 (we will take less but payment for 4 is required)

We rarely cancel. Please see our terms and conditions